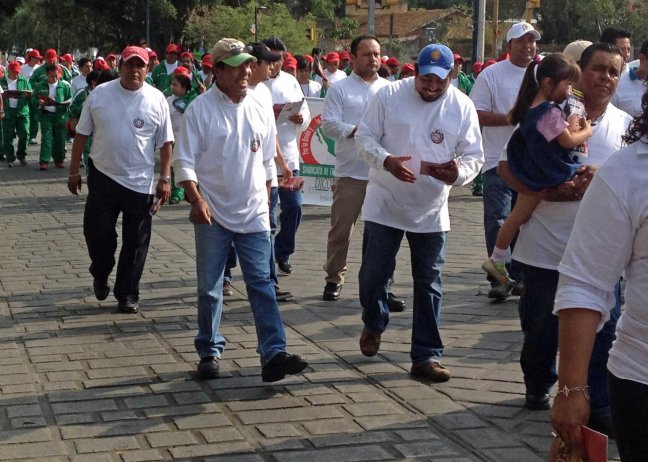 I knew something was up when I was woken by several large trucks idling at the kerb outside my door at 5.30am Friday morning. The marching band (trumpets, drums, saxophone) coming down the street several hours later confirmed it.
Walking to work I turned the corner to find the street full of people parading down towards the zocalo, each contingent carrying large vinyl signs and hundreds of large trucks parked nose to tail down the sides of the road. It only hit me what was going on after I had passed my first approx. 300 people. Friday was May 1st, and International Workers Day or Día Internacional de los Trabajadores.

The people taking part in the march/parade were beautifully coordinated (variously in track-suits, screen-printed t-shirts, and/or baseball caps) in the colours representing their area industries and unions.
At the head of the parade was a 40 piece marching band and then following behind them a series of different groups, interspersed with live music bands – amped guitars and singers playing from flat-bed trucks. Each band was several groups behind the next so although it was a lot of noise, each band could be clearly heard as they went past. 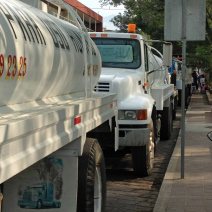 By the time I got to work, about a kilometre away, I hadn’t passed the end of the march. In fact, standing at the top of the road, I could still see thousands of people in the distance, walking towards where I was. This part of the parade had changed slightly too. There were no bands interspersed with marchers here, but people on megaphones, calling for better conditions, better pay and a right to be heard by the local government.
Which when you think about it, is actually what International Workers Day is commemorating.