One of the first things to come to mind when you hear the word Cuba are old american cars (máquinas), used predominantly as taxis. They are such an iconic image, and can be found all over the island, gently nursed by their third generation owners. The drivers will insist on opening and shutting the doors for you, as if you are too firm you run the risk of actually breaking the car. Only those who owned cars in or before 1959 (when Castro came into power) were granted full private ownership of their car. For everyone else the right to buy a new car, unless authorised by the government, was withdrawn. Many of the drivers I spoke to said that they were now driving the same car owned and operated by their grandfather, and as their father had done before them. Because the car had been in the family so long, it’s quirks were well-known, and the family then worked around and with its foibles to keep it running. 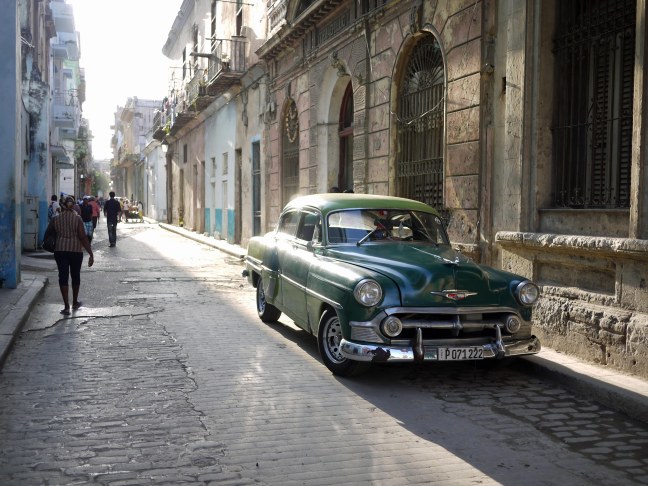 In November 2011, the government lifted restrictions, allowing Cubans to sell their cars to each other, and in December of last year new and used cars went on sale for all people for the first time since the revolution in 1959. However the Government decides the price of the car, and a new Peugeot 508 estate at a dealership in Havana in January was listed at the equivalent of US$262,000 (£160,000). Needless to say, not many cars are selling… In fact Peugeot was so angry at the government intervention on prices they withdrew cars from sale.

The expressways in Cuba (Autopistas) are excellent – 4 lanes on each side divided by a grass median strip with some tasteful low-cut bougainvillea bushes. Pondering about these roads as you zip down them though; they seem a little strange. The amount of cars on the road really doesn’t demand 4 lanes each way, and they are so beautifully flat and straight! Well the rumoured reason is so they can double as an airstrip if required. Occasionally you whiz past a pile of rusted junk by the side of the road, and should the country need to defend itself, these can be pulled into the road so enemy planes cannot land.

On the smaller 2 and 4 lane roads in Cuba I felt right at home (in Oaxaca). Cars, trucks and buses travel at high speeds, rapidly slowing down and doing exaggerated detours out into other lanes and occasionally across the road to avoid potholes and patches of unrepaired bitumen. It doesn’t actually matter that cars are coming down the other side of the road so much, as the drivers have worked out (or I hoped they had) a system of determining how long it would take them to get back into their correct lane before a head-on collision.

Under bridges and in other shady spots along the roads you will see locals waiting for a ride (botella), their hand out to oncoming vehicles with money showing at the end of their fingers. They are waiting (sometimes for hours) for (subsidised) public transport to come along, but they will pay something towards the petrol costs of a private and government car should one have room.
When you can’t rely on regular transport to get you places, distances in Cuba take on new meanings. A distance of 15km might take 2 hours to travel, waiting for transport and walking or using a bicycle. Unless urgent, people tended to travel singly, in hope they might have more luck squeezing into a vehicle, and timing their trips for days when there is a lot of traffic on the road. 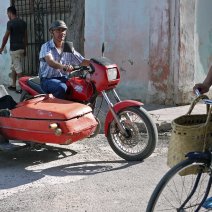 Much of the transport for local Cubans (buses, trucks, trailer buses (camellos), tractors, horse-drawn carriages) is subsidised by the government and it is reportedly illegal for tourists to take this transport – even if they picked you up in the first place. If the driver is caught with a tourist on board, it is assumed that the driver is taking extra money for this from the tourist and the driver can be fined.
The government created an entire bus company called Viazul to provide long distance ‘public’ transport for tourists. Unlike on buses for Cubans, Viazul passengers get possibly reclining seats (some work, some not so much), movie entertainment shown on a TV screen at the front of the bus (we saw Captain Phillips), and air conditioning.

In Havana and other bigger cities, the bici-taxi, or bici (bee-cee) is used as an inner city taxi to transport people short distances. Predominantly operated by hip young Cuban guys, your best bet is just to hold on as you careen around potholes, taking the shortest path around corners in order to race other bicis and establish dominance (or land speed records) for that particular block. Established to transport locals, they will also take tourists – in tourist currency.
The actual bicis, important as a source of income and status – are very well looked after: well-tended, shiny, some with names, slogans and possibly CDs attached to the back of the seats as reflectors.
Bici drivers seemed to me to have the most recognizable identity in Havana – young, fit and urban – they hang out together in tight-knit groups, discussing bike modifications, blasting music and polishing their aviator sunglasses as they stand clustered around someone’s bici. In a country where people earn the equivalent of $20/month, cars are out of reach for the majority of people. It is little wonder then, the status of a bici, and the coolness imparted by operating one.

2 thoughts on “Transport in Cuba”