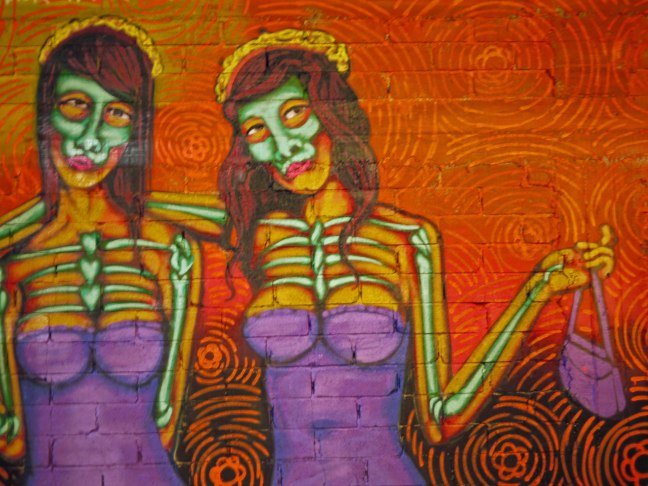 A bus trip to 2 cemeteries for dia de los muertos did not sound like my idea of subtlety. In fact I wondered if it was a good idea at all to spend 5 hours wandering around in the dark in small town cemetaries near Oaxaca to see a (admittedly important) dia de los muertos tradition. My misgivings increased as I sat surrounded by camera toting mainly American tourists in van #2 of 3 (there was also a bus) to travel in convoy to our first stop – the Xoxocotlan cemetery.
I shouldn’t have worried though, unlike in Western cultures, in Mexico, death is a part of life and the dead are formally remembered and celebrated each year over three days; October 31, November 1 and 2, in connection with the Christian triduum of Hallowmas: All Hallows’ Eve, All Saints’ Day and All Souls’ Day. The 3 days are meant to be the point each year where the ‘fabric’ between the living and the dead is at it’s thinnest, allowing the living to be able to communicate with their dead.
November 1 is traditionally the day for remembering children and those who died in accidents – day of innocents, and November 2nd is for everyone else. 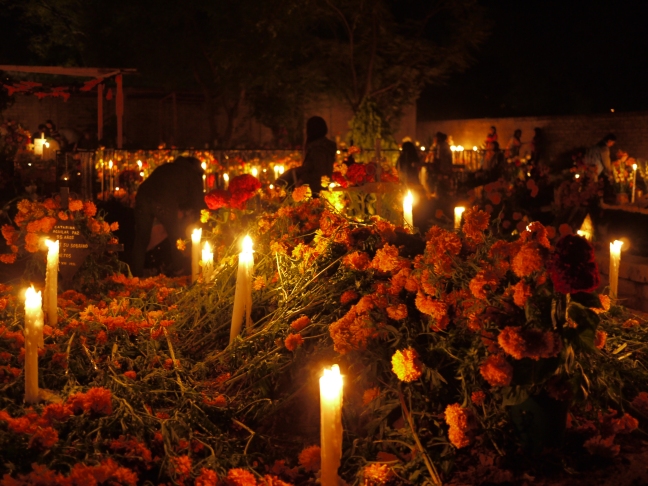 Cemetaries
Graves are cleaned and decorated ahead of the dia de los muertos, as most families will visit and spend time with their buried loved ones during this three day period – some taking a picnic containing the departed’s favourite foods to eat and share with their departed. In some parts of Mexico such as the towns of Mixquic, Pátzcuaro and Janitzio, people spend all night beside the graves of their relatives.

We arrived at the Xoxocotlan cemetery and walked past rows of food vendors selling tamales, churros, tacos, pizza slices, candles, flowers, mescal, water, soft drinks and coffee. Many families will spend the night with their loved ones and so these tiendas will operate all night as well, supplying sustenance as it is required. Inside the cemetery, there were candles and people as far as the eye could see. In such a large cemetery, the tourists were dwarfed in the crowd so it was easy to believe you were seeing this alone.

The atmosphere was nothing like I had experienced; it was supportive, warming, calm, friendly and still – almost like the people were patiently waiting. It was totally unlike any cemetery I have ever been in or experienced. People were chatting to each other, and had set up camp next to their loved ones plot, bringing folding chairs, flowers, candles, food and drink for the night. My friend and I wandered around, taking care to walk between the graves and spoke to people, asking on occasion whether it was OK to take a photo – and in each case, people gave their permission freely, sharing their loved one with us. We had bought small candles which as a sign of respect we offered to people we had connected with so they could add them to their decorations.

After reboarding the van(s), we drove again in convoy to the second cemetery, at Atzompa, which was a smaller town and instead of formal plots made of concrete, had graves mounded in dirt, so it was lucky I had bought a torch to help me navigate in the dark. Atzompa had a different vibe to Xoxocotlan, less carnival and more formal party with a big screen TV showing music clips, a band and an area for dancing. The cemetery was smaller and seemed a lot more private. I felt that I was intruding a bit more here and so didn’t wander quite so far, content to watch the entertainment and people heading back and forth to the food vendors. 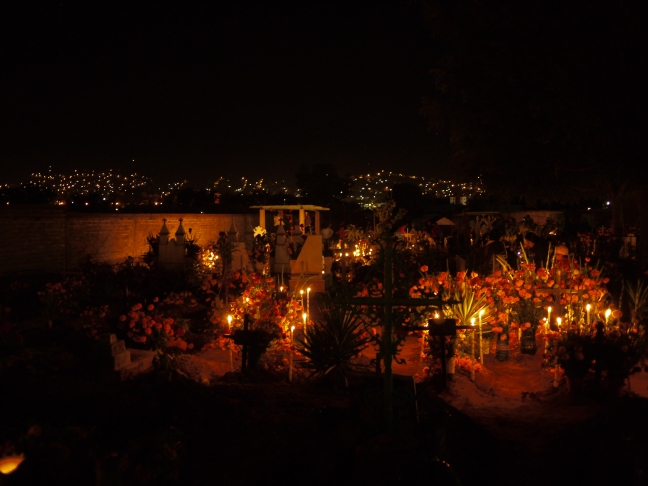 We left the cemetaries at about 11pm, which is the time locals start to arrive in earnest if they are going to spend the night. It was an experience I am so glad I had a chance to see, and really reinforced for me the difference between how Mexicans and Western countries treat death.

Last night, the last official day of dia los muertos I walked over to the main cemetery in Oaxaca and was surprised to find a complete sideshow in full swing at the gates to the cemetery.

There were booths for games of skill, a small roller coaster, pulled candy floss, toffee apples, roundabouts, flower sellers, a sock & underwear seller, and seemingly hundreds of food stands offering everything from hotcakes with condensed milk to pizza slices to quesadillas, tortillas and tlayudas. (Post on food to come)

Ofrendas
Mexican homes, schools and some businesses build altars this week to honour and welcome their personal deceased, with each level of the altar representing a different part of their life. These altars generally contain sugar skulls, candy, marigolds, bread and soft drink or water to refresh the departed spirit. Sometimes these altars are humorous and accurately reflect the person’s character as they were in life, so to see bottles of bourbon, cigarettes and toy trucks or motorbikes propped next to photos of the person is not altogether uncommon. 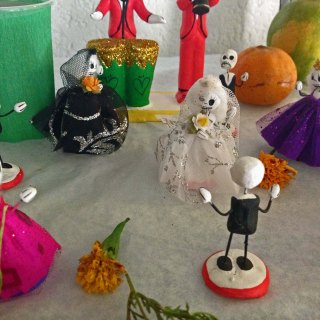 The altars are thought to encourage the souls to visit – and it is believed they can hear the prayers and conversations of the household during this week. Toys, blankets and favourite candy will be bought for the altars of children who have died.Some altars contain small tableaus of parts of the deceased life, showing them as a skeleton doing aerobics, as a clown, driving a car, being married and playing musical instruments. You can buy these little skeleton figures in all the markets in Oaxaca, each year families adding to their altars to accurately represent and remember the deceased.

Food
There is traditionally a special type of bread made and eaten at this time of year for Dia de los muertos. Pan de Muerto (literally translated as dead bread).

As far as I can understand there are two types, one pan de muerto is like a brioche, and has anise or orange water flavouring, and the second is pan de Yuma which is more like a sugary soft roll, made from egg yolk (hence the name) and decorated with pastry bones, representing death. Pan de Muerto here has a doll head included in it – made from pasta and painted. She is “buried” in the roll, with only her head showing, signifying this time of year.

La Catrina
La Catrina is one symbolic representation of death in Mexico, and every year locals and tourists get their faces painted to resemble living skeletons. Those dressed as la Catrina will wear a long flowing formal dress and a hat, to reference Jose Guadalupe Posada’s now famous etching, La Calavera Garbancera. In Oaxaca, fancy dress competitions were held to find the best costume for dia de los muertos.

I was in Puerto Vallarta this time last year, which is a city on the Mexican Pacific Coast, and which receives a lot of North American tourists and cruise ships each year. There, dia de los muertos was a more formally organised affair, with dances and free chocolate caliente and pan for the audience, and many more locals dressed up as catrinas and as the walking dead with clever makeup creating the illusion of the the skull under the skin.
Each city does dia de los muertos in their own way, and in Oaxaca it feels like this is the way it has always been done, and always will be – with parades and costume competitions, food, and altars and sand paintings and free concerts and dances. In the midst of life there is death.