As Swiss trains are so punctual, if you have time, a stopover in Zürich means that you do not necessarily have to stay at the airport.

Check in your bag if it’s not already checked through to your destination, and then if you want, also leave extra luggage at the left luggage counter (4CHF) so you can walk about with only your essentials.

Switzerland is not part of the euro zone, so you will need to change some money into Swiss Francs. The airport will accept euro (notes only) for Swiss purchases but change will be given in CHF, so make sure you use a small denomination note, or you need all the CHF change.

A return train into the city is 13.50CHF and takes 10 mins, leaving every 10 mins from the bottom level of the airport to Zürich HB, the main station in downtown Zürich. Validate your train ticket before getting on the train. If you figure out exactly where, let me know. In contrast to Shanghai, Swiss people wait for every single person to leave the train before they think of boarding themselves. Your train ticket is also valid for the local trams and even the boat cruise on the lake if you have the inclination.

I got a map of the city from the information desk at the airport, and a suggested walk around the lake is already marked out. This walk can take anywhere from 90 mins onwards to do, depending of course on how often you stop.

The route itself is super easy and goes past great shopping laneways – so on a nice day with lots of time, this could be very bad for your wallet.

I was lucky with the weather as it was raining as we landed and then it cleared up, only to start to drizzle again at the very end of my walk, once I was back on the train to the airport. Locals however were bundled up in winter coats and scarves. 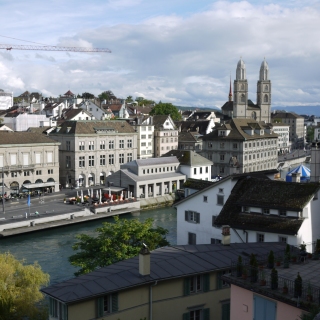 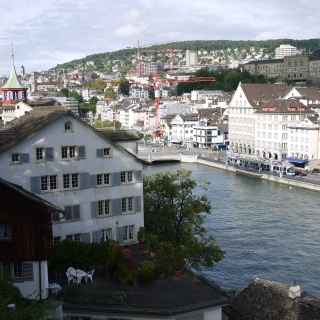 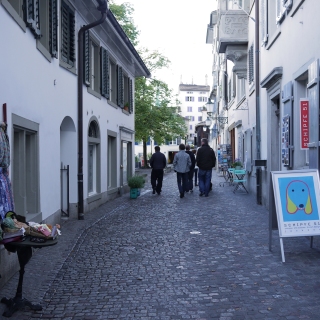 Once I had added up my costs, leaving the airport to go into Zürich was about $30CHF (includes water, small meal, train ticket, left luggage costs).
I found it a welcome outing, especially after sitting on an aeroplane for 11 & ½ hours, but if you had even more time on the ground, then you could go further afield as connections to Basel and Bern were frequent. Having such regular and guaranteed trains takes a lot of stress out of your plans, that’s for sure.