On Saturday night I went to my very first roller derby at the Richter City Roller Derby league.
Other than knowing the skaters had very clever subversive names, everything else I knew was from that Drew Barrymore film a couple of years ago (although I have got that film and Juno mixed up as the same actress was in both and now I think Whip It is about a pregnant roller derby skater who has to decide what to do with the baby, and whether she will skate in the team that wins the Championship)

Roller derby was a lot more fun than I anticipated, with the crowd really vocal and dressed in their team colours, which in this match-up was blue and silver (Comic Slams) against leopard print (Smash Malice). As such there were people wearing red wings with blue capes around their shoulders, girls in leopard print pajama onesies, little kids with signs, entire families and your regular people on the street.

For a brief explanation of what happens, let’s turn to Wikipedia;

two teams of five members roller skating in the same direction around a track.
Game play consists of a series of short match-ups (“jams”) in which both teams designate a scoring player (the “jammer” identified by a star “panty” over their helmet) who scores points by lapping members of the opposing team. The teams attempt to assist their own jammer whilst hindering the opposing jammer—in effect, playing both offense and defense simultaneously.

The gates opened an hour before the bout/match/game started, and it was very much a game night atmosphere with team merchandise, raffle tickets and lapel badges on offer and fresh cinnamon donut holes, hotdogs and hot chips for sale at half time.

For those who think that roller derby is a made up “faux contact sport”, much the same as WWF wrestling, I can assure you it is not. It’s a pretty full on very full on contact sport. I thought weaving through crowds on Swanston St at lunchtime was difficult; well this is that on roller skates!
The blockers are trying to stop the opposing jammer from getting through and lapping their jammer, and they do that by sticking their butts out, forming a fence of bodies across the track to stop the jammer getting through, bunching up, skating slow, skating fast and generally making things as tough as they can so the other team earns as few points for the jam as possible. 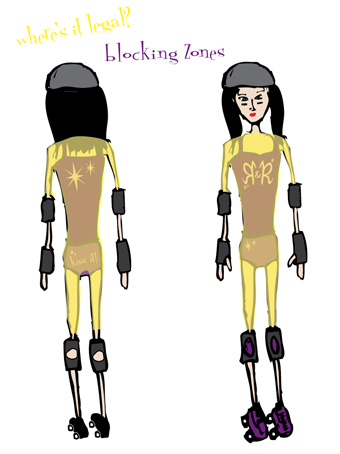 The jam can be called off by the lead jammer (by a dance-like head to waist movement with both hands) at any time within the 2 minutes – with chess-like strategies implemented to close the jam down when maximum points are gained balanced against the other objective of hindering the opposing team from getting any significant further points.

The jams are fast and furious with everyone skating full-out for the entire jam, around and around the oval flat track (taped onto a basketball court). I am pretty sure the bruises would be impressive the day after as some of the jams were really brutal with falls, offsides and then resultant penalties each jam. I think there are only about 5 team members on the track at once, so when they start disappearing to the penalty box, it makes the game pretty interesting when there is no one left to stop the jammer zipping around the track unimpeded.
During one of the jams, one of the jammers wrecked her knee, which was hard to watch, let alone own. Luckily the Wellington Free Ambulance also attends all matches and was on hand to assist.

We each picked the team we would be supporting – I even wore my new leopard print high-tops in support of Smash Malice. Unfortunately they didn’t win the night, but it was a good game and at one point it was a very close game.

So, would I go again? Yes, I think so. It would definitely make it more fun if you knew someone who was skating. funnily enough, the next day at work my colleague had faded numbers visible on her arms, which were also covered in lovely finger-mark bruises. I asked what sport she played in the weekend, and lo and behold she also plays roller derby – in the Levin league, so that would be fun to attend. Her league name is Blonde Moment.

There are roller derby name generators and people actually register their names with the league so they are a pretty important part of the sport. Generally they are a play on your real name, and can be really funny. For example, Iron Maven, Acid Reign, Maiden Hell, Damage Patch Kid, Iona Harley, Helen Killer, Leada Riot, and Plum Crazy. I want to join just to get a great alter-ego name I can then use on business cards cos I sure as heck can’t skate!